“Every day I see leadership at Dasher at all levels,” said Tracey Glenn, the president of Dasher.

“Just last week we had member of our team dealing with a very difficult caller.  Another teammate didn’t intervene but instead walked over and sat with the person who was taking the challenging call.  That action, that show of support, is leadership.”

Wikipedia defines leadership as “a process of influence in which a person enlists the aid and support of others in the accomplishment of a common task.”  There are some key words in this definition, but none is more important than the word, “influence.”

Tracey believes that a good leader remains humble and in the background all while influencing teammates to unlock their potential to reach the best possible outcomes and feel empowered and successful.

Tracey said, “I know I’ve improved as a leader significantly since I’ve been at Dasher.  And while I’ve grown in many ways, I think the place I’ve improved the most is in my listening skills.  I’ve found that a good leader spends more time listening and asking probing questions than telling people what to do.  Listening not only helps you lead better but also love more deeply.  And loving others is ultimately what it’s all about.”

Leaders ask a lot of open-ended questions because they are sincerely interested in the opinions and the mind sets of other people.  To inspire and to have a shared vision, leaders are very deliberate in communicating how a course of action accomplishes the goals of all the people involved.  The only way to know the goals of the people involved is to ask and listen actively to the answers to the questions.

“I am a Jersey girl at heart which means I can be fearless and move fast.  I have to make sure I keep that in check at times,” said Tracey in a conversation we were having about how Dasher’s culture influences people personally.  “I think it’s really important to shut down that instinct to move fast when communicating with the team to make sure I’m listening and meeting people where they are.”

When asking questions, leaders also show their vulnerability by sharing some of what motivates and inspires them.  That willingness to be vulnerable inspires others to share what is important to them without as much anxiety.

When asking questions, leaders also show their vulnerability by sharing some of what motivates and inspires them.  That willingness to be vulnerable inspires others to share what is important to them without as much anxiety.

The best part for a leader who is a good listener is that some of the best thoughts and ideas come from members of the team they are leading.  When teammates share ideas, they are improving their own leadership skills.  It is a win-win. 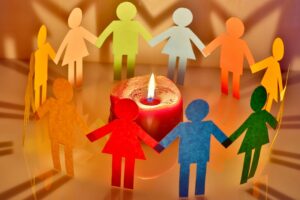