Andy Hart recently started at Dasher, but he has already become a seasoned veteran in Team Building 101.

He hails from Baltimore and worked for years for a Carlisle-based company that helped him develop excellent finance and special event planning skills.  As a rookie at Dasher, he was pleasantly surprised to see that they never kept him sidelined on the bench.  Instead, they immediately sent him onto the field, but with everything he needed.

Serving as Dasher’s new Business Relationship Manager, the team at Dasher has led by example in building relationships.  He has seen first-hand the value of being able to learn, being caring, and being respectful.

The Dasher family immediately welcomed him: “It was a special feeling.”

One of the ways Andy immediately adapted to the corporate flow and philosophy was by reading “The Talent Pool,” the award-winning book authored by myself and Cynthia Tolsma summarizing Dasher’s unique culture.

He says he finished the book in a day.  It was not only a fast read but a practical hands-on textbook outlining the secrets to Dasher’s success.

He saw first-hand that the company validated the book’s ideals and was authentically devoted to helping their team and clients lead “happy, healthy lives.”

Equipped with that knowledge, in the first 30 days, he decided to take more of a listen-and-learn stance.  Even as the new kid on the block, he rapidly saw that the Dasher team embraces new ideas and has a genuine belief in collaboration.

One of the team-building efforts he embraced was all the Dasher swag he received.  There were Dasher shirts, face masks, and coffee mugs.  Everything he needed to succeed at his job was already there for him, showing that Dasher team leaders cared about making him feel welcome.

He believes the positive atmosphere is organic.  Every department is tied together in marching toward the same shared goal.  Everyone there is on his team.

“Obstacles create opportunities for us,” he says.  “No day is ever wasted.  Good days bring happiness, and bad days bring experience.”

He sees the importance of being reliable, honest, flexible, and helpful to other team members.

“Being caring and respectful is huge” in the Dasher universe, he says.

Everyone also has a shared future vision.  When goals align, so do the workers as they advance toward that prize.  Andy is impressed that teammates do not just focus on platitudes or pie in the sky — they focus on measurable results together.

One of the investments Dasher made in him right off the bat was training.  The decision to train him further was a profession of faith in his abilities and long-term future with the company.  It meant a great deal to him.

He has already taken two online classes in sales and leadership training.

That faith in his future led to a simple equation for Andy: “They are investing in me, and I want to invest in them.”

Andy says the Dasher model focuses on creating everyone’s best self—not just the best ON the team, but the best FOR the team.

He discovered that the company’s weekly meetings always begin with good news.  They are welcoming of ideas.  Unlike in past jobs, his co-workers do not hesitate to speak up for fear of having their idea shot down.

The morning meeting helps to foster teamwork.  In the weekly stand-up, a large meeting uniting some 50-plus teammates, they talk about the value of the week.

Andy points to the “Gotcha” program, which encourages team members to recognize their fellow teammates for doing something good, friendly, or exceeding expectations.

Too often, especially in a competitive environment, a “gotcha” means catching people doing something wrong.

Dasher is a data-driven, customer contact services operation with a focus on communicating complex messages to diverse populations. Specific capabilities include face-to-face communications provided by our field teams, customer engagement strategies provided by our call center and member engagement staff, and secure, complex, variable mailing services provided by our production team. Dasher is an experienced Minority, Women and Disadvantaged Business Enterprise (MWDBE) with a bestselling book, “The Talent Pool,” and is certified by AICPA with the SOC2SM Type2 data certification and validation. 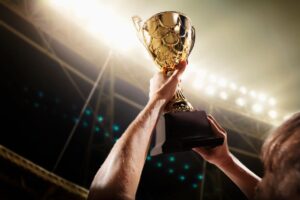 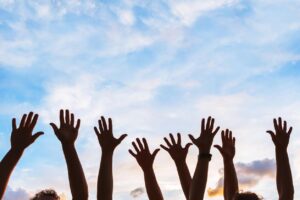